Much has transpired since my last post – Colin and I wowed our friends with our super-creative homemade Halloween outfits (more on that later), we had our first GracefulWait couples meeting (much more on that later), Justin got accepted to the University of Washington medical school (yay!), and the Republicans shellacked the Democrats in the mid-term elections (double yay!). Oh, and we got the go-ahead to start IVF again this month.

This news was about as big a surprise as finding out we had to cancel our cycle last month. See, Colin and I had basically surrendered ourselves to the probability that we’d have to wait until January to try again, the reason being that the fertility clinic’s embryologist would be on vacation during the week of Thanksgiving, and it wasn’t that likely that we could get everything done before she left. Considering that she’s the one who’ll be manipulating and combining our eggs and sperm – a reproductive mixologist, if you will – we kinda need her around for the procedure. Because my period took awhile to arrive, probably due to the hormonal assault from going on and off birth control and then taking fertility meds, I figured it would push the schedule back too far and not provide enough time to complete the cycle before Thanksgiving week. And because of Christmas and all the holiday activities in December, I assumed we’d have to postpone ’till January.

Knowing that this was a possibility, Colin and I tried to soften the disappointment by taking the “count your blessings” approach and thinking about the potential benefits of doing IVF in January – how we’d have more flexibility with our work schedules and wouldn’t have to deal with any holidays or trips. So when my period finally came and I called the doctor’s office, I had already steeled myself for the nurse’s announcement that we’d have to reschedule IVF for January. When she told me that I should come in for a baseline ultrasound on Friday, I was surprised the doctor would want to do that at this point. I was also surprised when they said my ultrasound showed no cysts since they had told me last month that I had an endometriosis cyst, which doesn’t go away unless it’s surgically removed. And then I was surprised when the nurse handed me the schedule, which estimates that the retrieval will be on Nov. 15 and the transfer will be Nov. 18, just in time for the embryologist to hit the road for her vaca the following week.

With this unexpected turn of events, I almost don’t know what I should be feeling – excitement, apprehension, or frustration over the constantly changing circumstances and the need to rework our plans for this month, including an academic conference that Colin now can’t attend and a trip to Grandma and Grandpa Hesse’s that we now most likely can’t make. I don’t want to sound ungrateful for this answer to prayer, so I will acknowledge that it is definitely a blessing to be able to move forward with IVF, especially with my baseline ultrasound showing no cysts (my pessimistic side is telling me that there is one there, that it was just hiding during the ultrasound and will wreak havoc later on in the cycle). However, I want to be careful to avoid getting my hopes up too much, or getting carried away with my fluctuating emotions. We have no idea if the stimulation will work better this time, if we’ll be able to do the retrieval and transfer, or if the embryo(s) will implant. It’s all in God’s hands, and there’s no point jumping to conclusions or freaking out about what might happen. So my goal is to take it one day at a time, to have flexible expectations and trust in God’s plans instead of my own.

Now I’m not a roll-with-the-punches kind of gal. I like my Google spreadsheets, iCal schedule, and comprehensive to-do lists. Heck, half my job responsibility is nagging people about turning stuff in on deadline (Colin would say the other half is nagging him about everything). So living life one day at a time without fretting about what I need to do now or in the future is a strange and frightening concept to me. I know I’ll need an extra measure of God’s grace to get through this time of immense uncertainty. This isn’t an affirmation that those who say “Just relax and you’ll get pregnant” are right; rather, it is a recognition that I need to tone down my Type A neurosis.

Perhaps I should emulate the laid-back, carefree attitude of Hungrybear9562, whose YouTube video provided inspiration for our Halloween costumes. This dude exemplifies the “live and let live” mindset and demonstrates how being relaxed and easygoing helps you really appreciate the beauty of creation. Smoking pot probably helps him with that, too. 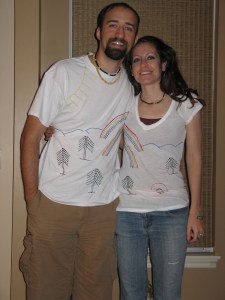 Our Spooktacular party with our friends was a blast, as was our first GracefulWait couples meeting, inasmuch as you can call hanging out with other couples who’ve suffered the pain of infertility and infant loss a “blast.” Seriously, we enjoyed talking with some friends we already knew and meeting new friends who are all on the same road as we are. We shared our stories and discussed how we wanted the group to be a source of encouragement for our relationships: with the Lord, with our spouses, and with other couples and families and friends. Talking about two verses in particular – John 10:10 and Ephesians 3:20 – reminded us that God has given us abundant life through Christ and that He does abundantly more than what we ask for or imagine, which aptly addresses our needs as couples facing infertility/infant loss to find contentment and peace in Him while asking Him to answer our prayers for a child. We are very grateful for this group and appreciate their support as we try IVF once again.

If you know your Shakespeare, you’ll recognize the title of this post as a line from “Henry V.” Beloved by Covenant High School alumni, this play describes events immediately before and after the Battle of Agincourt during the Hundred Years’ War. I chose this title from the speech at the siege of Harfleur because in some ways, it feels like we’re gearing up for another battle in our long War against Infertility, which feels like it’s as long and fruitless as the War on Terror. Yeah, I know that’s terribly melodramatic, but cut me a little slack for this English teacher-worthy analogy: To get through IVF and whatever happens afterward, I know we’ll need a band of brothers – loving family members, empathetic infertile friends, compassionate fertile friends – supporting and praying for us. Thanks for your encouragement and patience with my nerdy literary references.