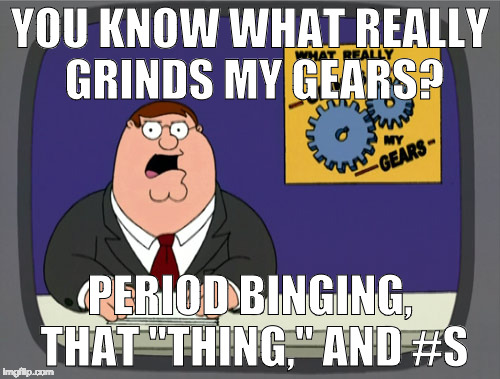 While the Internet has been great for enabling communication, aggregating information, and allowing us to self-diagnose a variety of ailments via Dr. Google, it has severely corrupted the English language. Influenced by texting chatspeak and the one-liner-rama known as Twitter, our everyday speech now contains jargon that violates all kinds of grammatical rules, flaunting syntactic delinquency and promoting verbal idiocy.

I admit to using a number of modern idioms in my posts, but some I simply cannot stand. The Spirit of Perfectionism compels me to advocate for more articulate, comprehensible dialogue by beating down ridiculous lingo.

For this first round, I’m going full John Wick puppy rampage on three trends that are successfully making the world a dumber place.

Make. It. Stop.
I used to think excess exclamation mark usage was one of the most egregious stylistic offenses a person could commit. Sure, it’s tolerable in enthusiastic text messages to your friend about the One Direction boyfriend Tee you just snapped up at a thrift store, but in a work email? “Jennifer! Our numbers are down! I uploaded the proofs to Dropbox! When are you sending your TPS reports!” Total !nsanity.

Somehow, at some point recently, for no good reason whatsoever, the exclamatory frenzy gave way to another equally atrocious, linguistically laborious trend that is So. Freakin’. Annoying.

Yeah, I typed out all three of those dang periods, hating myself with every keystroke.

Who the heck got so infatuated with a typographical symbol designed to mark the end of a declarative sentence that they up and made it trendy to use when separating short and – let’s face it – usually simple-minded words?

Back in journalism school, we were taught to use punctuation marks sparingly to conserve precious print space, hence the AP style’s rejection of the Oxford comma. This period fetish is yet another way the Internet has screwed over the journalism profession and made us all highly informed yet stupid as muck.

As a blogger with a journalist background, it behooves me to warn you that period binging is a slippery slope. Right now, it’s cool to use three periods, but who’s to stop that from increasing to four, then eight, then 15? And how soon before it creeps into single words and makes our language even more dis.joint.ed.?

During this election season, I think we should launch a different, more productive campaign to Make Sentences Coherent Again and put the kibosh on this choppy, stunted speech pattern. Let’s find other ways to convey emphasis, such as using italics or underlining – something besides periods. Or, here’s an idea: Quit talking like a hipster. Bam! Problem solved.

Why is ‘thing’ a thing?
Now this is just embarrassing. Have we all grown so empty-headed as a society that we can think of no greater word for – well, anything – besides “thing”?

It might’ve been funny the first, maybe even the second time someone used this trivial word in a catchall type of way. But today, it has become an epidemic, infecting normal adult conversations from soccer mom chitchat to coffee shop discourse to Bible study discussion – even pseudo-intellectual TED talks.

What if – God forbid – someone starts combining this ambiguity-perpetuating buzzword with other inane expressions? Our language would become completely meaningless.

“Just sayin’ a thing.”
“Today be like things.”
“WHAAAAAT thing.”

This is middle school sexual innuendo-level humor, people. There’s a better way to say stuff. Lemme introduce you to a neat resource that’s handy for all sorts of items – like I just swapped out the potential usage of “things” with the ordinary yet less brain-insulting “items.”

It’s called a thesaurus, located under Tools in Microsoft Word, and also available for your convenience online at sites such as Merriam Webster. Let these resources help you find synonyms to build a stronger vocabulary beyond a single syllable word you learned as a toddler.

Get over this absurd addiction to “things” and start talking smarter than a stoner.

#Ihatehashtags
Yea, I know I’m a hypocrite when it comes to this fad. Yet at the end of the day, aren’t we all hypocrites who hate Wal-Mart but shop there anyways?

The way I see it, hashtags are a necessary evil if you want to gain new followers on social media. But do the pros of using them always outweigh the cons of exasperating readers to the same level of annoyance induced by people who scrape their forks against their teeth?

On a pleasant note, hashtags can be clever and help people connect. On a practical note, they are difficult to read and come straight from the fourth level of linguistic hell reserved for group text messages and Kanye West quotes.

For your origin story of the day, the now-mighty # symbol has been known as the number sign, the pound sign (not to be confused with the British £ sign), a sharp in a musical context, and the sci-fi-sounding “octothorpe” – supposedly created by an employee of Bell Laboratories in the 1960s in honor of U.S. athlete Jim Thorpe.

Not sure whose bright idea it was to take the perfectly decent octothorpe and warp it into a mark looping a word or phrase to a broader online conversation on a designated topic. I’d say the inventor should be shackled to a stockade shaped like that wretched symbol of their own making, but it’s probably not their fault that social media users exploit it so profusely.

If you must use hashtags to promote your upcycled pop can Christmas wreath etsy shop or whatever, at least take a minimalist approach. A thought to ponder: When you have to scroll more than three times through the hashtag list on your Instagram post, you’ve probably ODed on tagging. Ain’t nobody got time to read through all that gibberish.

As a reluctant participant in this trend, I’m committed to reporting and rebuking hashtag abuse. We must stand up to reckless tagging of insignificant words and bizarre combinations of wordsjumbledtogether before we begin audibly speaking other symbols before phrases just to sound relevant and cool, as in: “Asterisk, this post is lit.”