As you can tell, my New Year’s resolution was not to update the blog every week. But before you get too disappointed, take cheer by the possibility that the return of Lost next week might motivate me to post more frequently. You all want to hear my theories about the infamous island castaways/time travelers/ghosts(?), right?

In the brief interim between finishing re-watching last season on DVD and gearing up for the Season 5 premiere this Wednesday, I’ve got a little time to recap our holiday activities. Overall, we had fun getting together with family and catching up with old friends. I have to say I’ve never played Apples to Apples so much in the span of 10 days. I didn’t mind that this turned out to be the board game du jour because I ended up cleaning house several rounds.

After spending a good three days waiting at airports trying to fly out of winter-battered WA, Colin’s parents joined Gavin in traveling down to AZ for Christmas. Together with Grandma and Grandpa Hesse, we all passed the time munching on cookies, answering questions posed by the Are You Smarter than a Fifth-Grader? portable game, and playing with the Wii Gavin got me for Christmas. Despite my aversion to almost all video games, I really enjoy Wii Sports. I discovered that I’m a stellar boxer – I KO’ed Gavin, Gary, and Colin one right after the other. Since I started hitting up the Wii Fit, I’ve also learned that I’m terrible at yoga. For example, the Tree pose is supposed to look like this:

But my Tree looks more along the lines of this:

Oh well. Between the Wii Fit and my new Dancing with the Stars Latin Cardio Workout DVD, I’ve got plenty of tools to help me stay in shape in ’09. And, by implementing my haul of Lush and Bath & Body Works loot, I can sweat like a pig and still smell fresh as a sun-ripened raspberry.

But enough about exercise and body odor; I’ve got Christmas pictures to post! 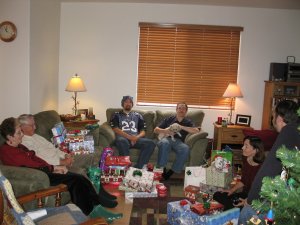 In case you’re wondering, that is a MacBook you see in my hands. Colin put his ASU student ID to use and got a discount on a 13-inch Dual-Core laptop, of course shocking me at his generosity and deception (he flat-out lied to me about getting a laptop this Christmas). We both love Macs, which are far superior to PCs for reasons too numerous to detail in this post. Our enthusiasm even convinced John and Emily to get a MacBook Pro with their Christmas $$.

And that provides the transition I needed to segue into my account of our trip up to T-town. We spent New Year’s with Emily and John and my parents (Justin had already left for Christmas training with the swim team – soooooo glad I don’t have to do that anymore!).

It was a struggle to fend off sleep ’till midnight on New Year’s Eve, but somehow we managed to keep awake for the ball drop and stayed up watching Ryan Seacrest introduce so-called musical performances by a bunch of “artists” I’d never heard of before. Besides hanging out with our friends Megan and Rachael and Jason, we occupied ourselves making and eating appetizers; watching football, and when that got boring, turning on Becoming Jane (the guys all opted to take a nap); and staring at Bauer while he gnawed on his freakin’ huge bone. 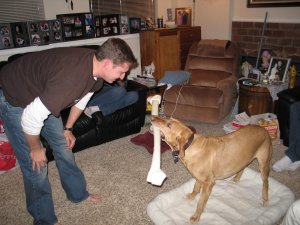 In closing, I’d like to point out that I suppressed my curiosity sufficiently and did not peek at any of my presents before Christmas. I proved to myself and others that I do possess some modicum of self-control, at least in terms of gift-snooping. Now if only I could exercise that kind of restraint when it comes to chocolate.