There’s a story I’ve etched in my mind’s eye for its vivid illustration of regeneration.

In “The Voyage of the Dawn Treader,” the third book in the classic children’s series The Chronicles of Narnia by C.S. Lewis, a whiny and entitled British boy named Eustace lands himself in a dreadful plight when he steals treasure from a dragon’s lair and then turns into a dragon himself.

After several days of feeling miserable trapped inside a monster’s body, Eustace is saved by the lion Aslan, who takes him to a well to be bathed. Aslan instructs the dragon-boy to “undress” first, and though Eustace attempts to scratch off layer after layer of scales, he cannot break through to the smooth surface of bare skin. Then Aslan tells Eustace he must let him do the undressing, and the child, desperate to return to his own body, agrees. The lion does so, claws ripping away the entire beastly mantle, throws Eustace in the water, and dresses him in new human clothes.

The restored Eustace later describes the process to his cousin:

“The very first tear he made was so deep that I thought it had gone right into my heart. And when he began pulling the skin off, it hurt worse than anything I’ve ever felt. The only thing that made me able to bear it was just the pleasure of feeling the stuff peel off.”

Many interpret this story as a metaphor for salvation. We are dragons imprisoned in bodies of death due to our hardened sins, which we cannot remove on our own. Only God can strip away the husk of our wicked nature, wash us clean through the blood of Jesus, and clothe us in His righteousness. This process necessarily inflicts pain on the creature being transformed, as tearing off an essential part of self would naturally do, and comes at a steep cost to the One who does the tearing: the death of His Son, who in Scripture is referred to as both a Lion and a Lamb.

It’s a striking portrait, isn’t it? Eustace’s “come to Aslan” story bears such fantastical imagery that since reading this book as a child, I’ve held it dear as an emblem of what it means to become a new creation in Christ, demonstrating both the agony and the joy of rebirth.

Recently, I’ve discovered another life process to which this parable can be applied.

This is what writing is like for me. When I write how I feel about someone or something, it’s like peeling off skin. Whether it’s really me doing the peeling, or more accurately God rubbing a pumice stone to slough off my flesh, I cannot necessarily say. I just know that it hurts.

I also know that it’s good. Writing helps me process my emotions, to harness the swirling waves of doubt, sadness, grief, and longing, and funnel them into something sensible. Then, I can sort through the rubbish of sin and shame and lies, and pinpoint the Truth that anchors my soul.

It also helps others, or so I seriously hope. Although as a kid I got hooked on reading and composing great works of historical romantic fiction, what really got the ink flowing through my veins was when I began blogging about my infertility issues to encourage others who were aching like me. And nearly all my posts then and now have carried that same intent: reveal the struggle, comfort the heartbroken, exalt the Lord.

Other writers feel this way, I suspect, as well as anyone who lets down their defenses and puts their true selves out there for some greater cause. Those who take up the dare of vulnerability know it’s worth the burn of ripping away your public veneer if it ultimately facilitates healing, for yourself or others. It leaves you tender, sore, unguarded against attack, but it also saves you, changes your thinking, creates new life – like how the Creator breathed the world into life through the words, “Let there be …”

As Brene Brown says in her book, “Daring Greatly: How the Courage to Be Vulnerable Transforms the Way We Live, Love, Parent, and Lead”:

Disappointment and true worth

I explain all this so others can understand that when someone uncovers a bare facet of her heart – like when a writer reluctantly pushes “publish” on a gut-spilling post – it feels like both heaving a weight off her chest and deliberately stepping into a nightmare, where she’s standing in front of a classroom, buck naked.

And, when she receives little to no response to her disclosure, left there hanging in the harsh limelight of full exposure, she feels embarrassed. Ashamed. Loathing her decision. Doubting her purpose.

It doesn’t make sense. Why would people not react to something that’s so visceral to you? Do they not care? Should they not care?

As I’ve spent the past several months “putting myself out there” to build a platform for my writing, I’ve experienced a little of this raw and lonely discomfort when I haven’t received the level of reaction I was anticipating. Being vulnerable on social media and not receiving much social support isn’t all that likable.

While valid points can be made about how I shouldn’t care so much about what people think, and should probably spend less time on social media, anyway, that doesn’t negate the genuine pain of feeling let down – a feeling that everyone experiences at some point. And those who unveil deeper layers of their public masks have harder to fall in their disappointment.

Just as I’ve done in the past, writing on subjects like infertility and the challenges of motherhood, I’m writing about this type of discouragement to get it out in the open so that others know they are not alone in suffering the biting chill of unrequited vulnerability.

When you share a private struggle in an attempt to uplift someone else, and that person fails to reciprocate at the same depth of disclosure, you are still heard.

When you passionately step out and take action to advance justice or expand empathy, and few others seem at all interested in that mission, you are still seen.

When you labor over growing a ministry to serve God and love your neighbors, and it reaps a meager harvest, or no visible fruit whatsoever, you are still valued.

We are still heard and seen and valued because we are cherished by a God who measures our worth according to His love for us, not by how others regard us.

As I’ve been tending to wounds of unmet expectations, it seems no strange coincidence that the next book on my reading list would be one emphasizing how we should embrace our limits as a means of glorifying our limitless God.

In “None Like Him,” author Jen Wilkin highlights traits that are true only of God, and describes how we can better bear His image by acknowledging our human inadequacies. 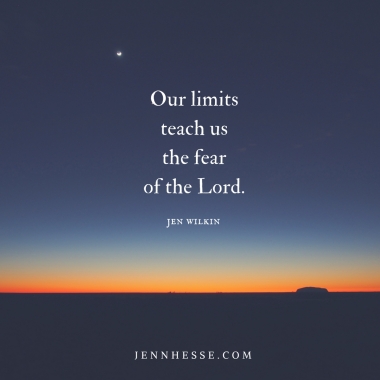 Through my writing, I cannot always successfully reach a sizable audience or elicit a preconceived level of emotional reaction, but God doesn’t have this problem. His Word goes forth and does not return empty (Isaiah 55:11). He Himself will fill the earth with the knowledge of His glory (Habakkuk 2:14). If no one would speak about Him in worship, the stones would cry out in praise (Luke 19:40).

We are limited in how much good we can accomplish through our disclosure. We cannot control how people will respond to our vulnerability. We do not have the power to save souls, no matter how greatly our hearts are invested in that purpose.

And that’s OK. We don’t have to be God. We don’t need others to constantly validate our feelings because Jesus can sympathize with our weaknesses. Rather than being ashamed of our naked state, we can approach the throne of grace with confidence, knowing we’re never hidden from His sight. His Word is living and active, and will pierce the hearts He intends to indwell (Hebrews 4:12-17).

He sees me. And He sees you. He loves us all enough to continually strip away our callused scales of sin to ultimately dress us in robes of His holiness.

God’s words will never fail even if mine go completely unnoticed. Knowing this truth, I will continue to write and peel off my skin, risking the sting of feeling ignored. This process hurts. And it also feels a bit like glory.

14 thoughts on “On writing, sharing your heart, and feeling it bleed out”